This Thanksgiving, Spike Lee’s “She’s Gotta Have It” is making a come back in a major way. Spike has partnered with Netflix to modernize his 1986 classic. Not only has the screenplay been converted into a series, but the script has also been updated to address tons of relevant underlying issues that most of us face daily. The cast is all new too — I mean, the names are the same, but the actors and the characteristics of each of the main characters have also been updated for 2017.

My lady and I had the opportunity to watch an early screener of the first episode about a month before the show’s release date and man, when I tell you this is some thought-provoking must-see TV, I mean it. I don’t know if there’s anything better to watch with your family this Thanksgiving day. If my word isn’t good enough, here are 3 reasons to watch “She’s Gotta Have It”.

1. It’s pure comedy!
– Spike and Tonya Lewis Lee did an amazing job with the new cast of characters, especially Nola Darling, played by DeWanda Wise, and Mars Blackmon, played by Anthony Ramos. It’s rare that you’ll be able to go more than 5 minutes without striking a smile or bursting out in laughter.
2. It’s Real!
– She’s Gotta Have It addresses a number of real-life issues that I’m sure we can all relate to in one way or another. Covering topics near and dear to native New Yorker’s hearts such as gentrification, street harassment, sexual stereotypes and myths, body shaming and polygamist relationships. This show touches on all the things we should but don’t know how to.
3. It’s sexually driven
– The show uses sex to pull people into the storyline of each episode while connecting “It” (sex) to everything from relationships to the foundation of Nola Darling’s art.

If these three reasons to watch “She’s Gotta Have it” aren’t enough for you to tune in, you should probably take a leap of faith and watch episode one for the culture. I doubt you’d regret it. 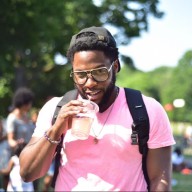 “She’s Gotta Have It” opens up a contemporary conversation of the reality woman face when catering to their real wants and needs. Definitely relatable and a must watch